from “80 Percent Rule: Fact or Fiction” by Marliss McCollum

“When your main worship service reaches 80 percent of comfortable capacity (measured at 30 to 36 inches per person), you may be pretty certain that you are discouraging frequent attendance by current members and presenting a ‘no vacancy’ sign to newcomers,” says Alban Institute senior consultant Alice Mann in her book Raising the Roof.

“If I am brand new to a church and the only available seat is way up front, I may leave,” [Mann] says. “If I am a member who is on the fence about coming to church on a particular day, my expectation of crowding may tip the balance in favor of staying home. Until people begin to consider these questions of human motivation more carefully, they often don’t ‘get’ the 80 percent rule. Instead, they hold onto the premise that nothing has to be done because the church isn’t full yet.”

When church members perceive there to be vacant seating, resistance to believing capacity is an issue is common, consultants say. But they also report that much of the seating that members identify as available is not what most newcomers would consider comfortable or inviting seating.

Using 25 inches per person to calculate comfortable capacity in the churches he surveyed, Moss found that average annual attendance increased until it reached 57 percent of comfortable capacity. At that point it began to decline. Consequently, Moss says, “I think resistance to growth occurs at about 57 percent of the comfortable seating capacity. After that, people have to sit closer to each other, and Americans are accustomed to space. We want to have our own turf.” It is because of evidence like this that consultants often recommend a church consider adding a second (or other additional) service once it has reached 65 to 70 percent of its comfortable capacity.

“I would prefer that a church add a second service before reaching 80 percent capacity,” says [Jim Moss, a church growth consultant with 26 years of experience.] “It is a major change and in many churches there is a lot of resistance to it, so it can take a long time to accomplish.”

What many churches have found, though, is that adding a second service has been key to their continued growth.

Alban consultant Patricia Hayes says many congregations believe the 80 percent rule doesn’t apply to them. “They say things like ‘We don’t mind sitting close together’ or ‘The children leave after the first ten minutes.’ In cases like that, I have them look at their visitor return rate—the number of new members versus the number of annual visitors.”

“It’s very difficult to keep a church full for more than five years without a plan to address the issue of crowding,” Moss agrees. Even when there is such a plan, he says, there must be confidence among parishioners that the plan will be implemented. He cites the example of a church that had been pushing capacity for five years, yet remained unwilling to add a second service. Although it had a plan to address the issue of crowding—and had acquired property and obtained the necessary funding to build a larger facility upon it—the church ultimately lost half its members in an 18-month period. “The younger members did not believe anything was going to happen,” Moss explains. “They just lost the vision.”

Welcome to worship with Peace Mennonite Church. If this is your first time worshiping with us, please watch this welcome video from our pastor. Whether you are new to Peace or a regular participant, we are glad you are with us in worship and invite you to join us for our Zoom discussion and prayer…

END_OF_DOCUMENT_TOKEN_TO_BE_REPLACED 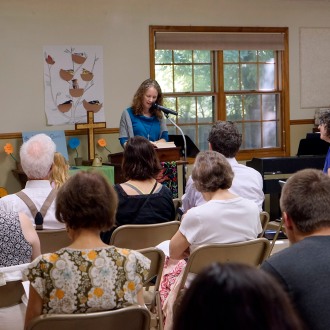 Yes, we are Mennonite. No, we don’t wear funny hats. (Not usually, anyway.) We think a lot. We pray a lot. We laugh a lot. And we sing a lot. (Some of us really well.) We nurture the children in our midst. We participate in Justice Matters. We cook for and serve at LINK. We have the…

END_OF_DOCUMENT_TOKEN_TO_BE_REPLACED

Following Jesus is not easy and we don’t always get it right. But we do the best we can. Check out these Service Stories to see how Peace Mennonite participants are living out their faith during the Covid-19 crisis. We Serve Others Monthly service at Lawrence Interdenominational Nutrition Kitchen Contributions of money and supplies to…

END_OF_DOCUMENT_TOKEN_TO_BE_REPLACED

Why we love Peace Mennonite Church:

Why we love Peace Mennonite Church: